In a recent study published in Cellular SIgnalling, researchers identified MAP2K6 (also known as MKK6) as a novel potential target for Esophageal adenocarcinoma (EAC), an aggressive form of cancer with a 5-year survival rate of less than 15%. As part of a drug repurposing study, it was found that the drug Ouabain inhibits MAP2K6, leading to reduced levels of the transcription factor SOX9 which in turn decreased EAC cell growth and proliferation.

This was the first time ever that MAP2K6 was mentioned with EAC in an abstract of a publication; making it a significant first co-mention. Within the Euretos AI Platform, such ‘abstract level’ gene-disease novelties are monitored continuously as these have a higher likelihood of being significant. In cancer literature alone, over 550 novel gene-disease mentions are published each month! Given the potential value of these publications, Euretos provides a service to track such novelties, taking into account the many synonyms that are used for genes as well as diseases. MAP2K6, for instance, has over 20 different synonyms that the Euretos platform automatically recognises: 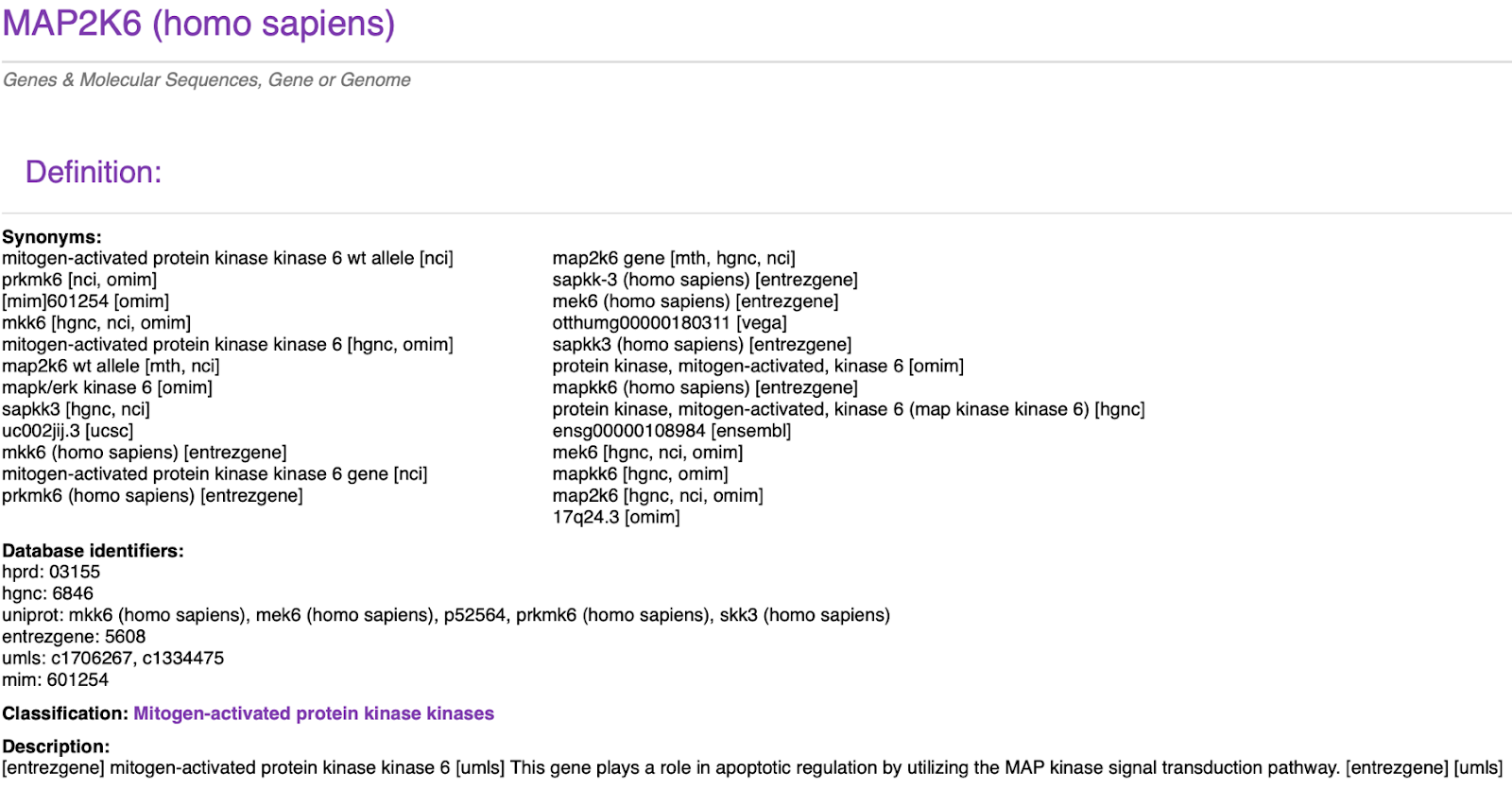 However, as these abstract level gene-disease mentions are novel, the availability of further analysis is often quite limited. The same is true in the case of MAP2K6 where much is still unknown regarding the specific interactions that MAP2K6 has in the context of EAC as well as in other types of adenocarcinomas. 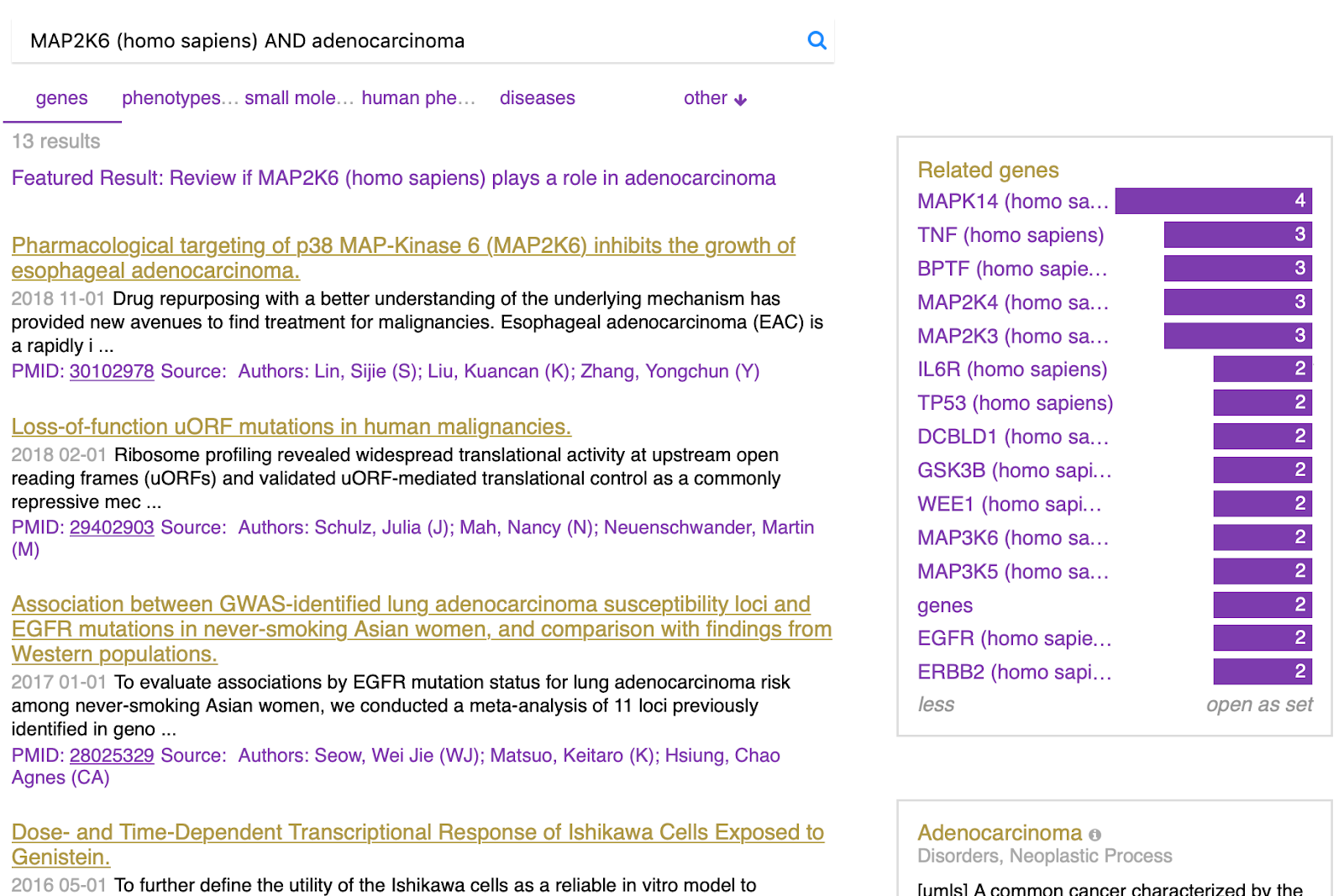 Figure 2: Publications mentioning both MAP2K6 and adenocarcinoma in the abstract or as declared by the authors. Only 13 publications are available. Euretos provides a ‘featured’ result which enables a detailed analysis of MAP2K6 involvement in adenocarcinoma. (source: Euretos AI Platform)

In terms of adenocarcinoma dysregulation, for instance, MAP2K6 is co-dysregulated with 14 other genes:

In terms of cellular and molecular dysfunctions, for instance, MAP2K6 plays a role in dna damage, aneuploidy and, especially interesting in the EAC context, intestinal metaplasia. Many of these interactions are not directly associated with MAP2K6, but with interacting proteins, associations which are normally hard to find:

In Barrett Esophagus, a precursor for EAC, MAP2K6 is involved in re-epithelialization, one of the major processes in the formation of esophageal adenocarcinoma.

In conclusion, although very limited direct literature exists of the involvement of MAP2K6 in esophageal neoplasms and adenocarcinoma, the Gene-Disease Analysis workflow reveals many relevant associations. Through its protein network, MAP2K6 is involved in various key mechanisms such as re-epithelialization, intestinal metaplasia, tumor metastasis and survival.

The full analysis is available on request via the contact form on the Euretos website or at information@euretos.com

About this series - The purpose of the Euretos Research Note series is to provide a data analytics perspective on recent life sciences publications. The series focuses on two types of questions: (1) Did the available data already point in the direction of a discovery? (2) What further research angles does the available data and publications suggest?